Last year I made a commitment to running a revolver basically exclusively for a year. It gave me the opportunity to really grasp some of the nuance associated with the wheel gun. This year I am looking at doing sort of the same with smaller pistols. I don’t want to limit myself to just backup sized guns, so I will still be using my 509 as my primary gun while using smaller guns as true backups or NPE guns.

I fully intended to run a Ruger LCP, likely the most popular gun of its type in the country. I stumbled across the Beretta Pico as a second option, and ultimately decided to go that direction. The Pico has a few key features that pulled me its direction. Most diminutive handguns have similarly diminutive sights, except for the Pico. The sights are also easy to upgrade to night sights if I really wanted to. The Pico also using a serialized internal chassis system, making the grip module itself interchangeable. Since I like to tinker with grip frame stippling, being able to toss a nee grip module on the gun after I screw one up is pretty handy. Being a Beretta, the Pico is also well supported by the manufacturer. My expectations for pocket sized guns are pretty low, so good factory support was definitely a consideration in this case. 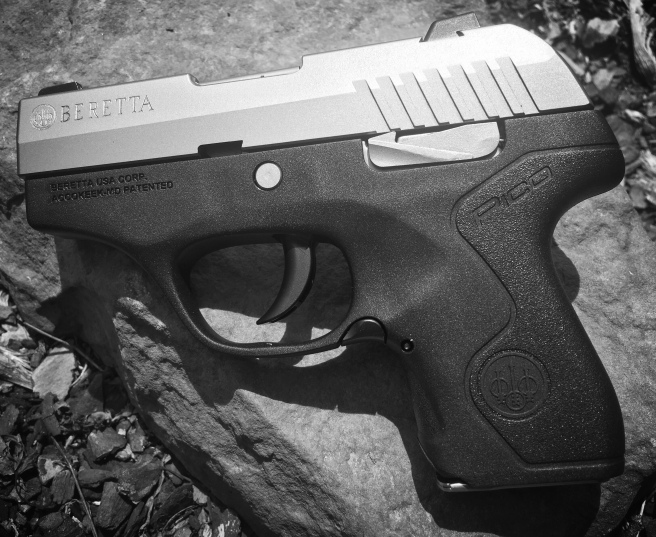 Today was the Pico’s inaugural trip to the range. It ran without issue, although I did note a bit of hesitation when loading the first round from a full magazine. Otherwise, the gun ran fine. All of the shooting was with two hands, and primarily using the flush fit magazine. There is a significant difference in shootability between the two magazines. I wouldn’t say the Pico has a lot of recoil, but it is noticeable and grip size makes a significant difference.

The gun shot to the right quite a bit at 10 yards. An initial visual inspection of the sights did not indicate any alignment issues, but a closer inspection shows there might be a very slight misalignment (0.010″ or less) of the rear sight to the right, which when paired with the incredibly short sight radius I suppose is enough deviation to cause issues.

The target is the first 11 rounds through the gun, shot at 10 yards. Pending further testing, a slight tweak on the rear sight will be likely.

The trigger is not horrible, not nearly as I expected after reading and watching a few reviews online. I guess a year behind a revolver makes shooting a DA trigger an easier task, as I felt it was that bad.

While the jury is still out, and my expectations are not super high to start with, I think the Pico might have some promise. A common issue with pocket sized blasters is they tend to not have the service life of their larger counterparts. We will see if the “new and improved” Pico can pull off a decent run. The intent is to run it until breaks, or I get tired of buying .380 ammo.

View all posts by Nate

5 thoughts on “Chronicles of a BUG: Beretta Pico”